What is the Potential Impact of EVs on Cities’ and Utilities’ Charging Capacity?

The market for electric vehicles (EV) is still in its initial stages, despite all the on-going hype. Tesla and CEO Elon Musk are in the news almost daily with reports on meeting Model 3 production goals, semi - autonomous driving capabilities, the company running out of cash, taking Tesla private and the like.

Auto companies are going all in converting their light vehicle lineups to plug-in hybrids and electric vehicles. Håkan Samuelsson, President and CEO, Volvo Car Group has said “We are determined to be the first premium car maker to move our entire portfolio of vehicles into electrification.” Going to their Website, Volvo Car Group lays out a set of milestones: 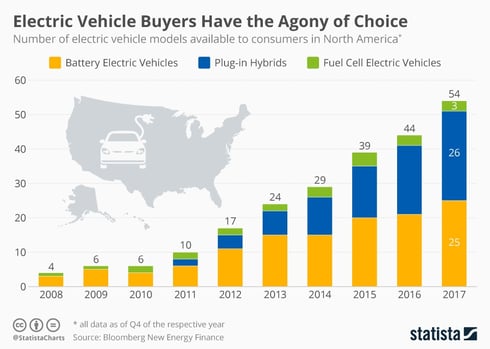 If one goes to Google and asks the question “how many electric vehicle models are available in North America?”, an infographic from Statista | Business Insider shows the number of models available from 2008 to 2017.

In a December 19, 2017 article, Bloomberg cites that automakers have ambitious plans to introduce more than a hundred battery powered models during the next five years. Despite the growing pipeline and supply of plug-in hybrid and battery electric vehicles coming to market in future years, drivers are not exactly excited about the new technologies. There has not been widespread migration from gasoline powered vehicles.

In the Bloomberg article, researcher LMC Automotive reports that electric cars comprise today only 1 percent of auto sales worldwide and even less in the United States. By 2025, LMC forecasts electric car sales will be just 2.4 percent of U.S. demand and less than 10 percent globally.  McKinsey’s Electric Vehicle Index projects that by 2020 EV producers will move about 4.5 million units, approximately 5 percent of the overall global light-vehicle market. McKinsey estimated that in 2017 global EV sales exceeded a million units.

EV models are being introduced at a rapid pace and the new models will be fighting over a small sliver of market share. Today no one has a handle on what the actual demand will be.

For any EV shopper, poor driving range and price have been the two biggest hurdles to EV adoption. If EVs can reach performance and price parity with gasoline-powered cars, will that help expedite the shift to EVs?

In McKinsey’s 2016 EV Consumer Survey, the third most serious barrier to EV purchases was having enough access to efficient charging stations. To help overcome this barrier, Tesla built out its own global network of charging stations https://www.tesla.com/supercharger. In North America, there are 1,327 Tesla Supercharger Stations with 10,854 Superchargers.

In the following two Infographics, Statista estimates the number of global publicly accessible EV chargers by type and the number of EV charging points in the United States. 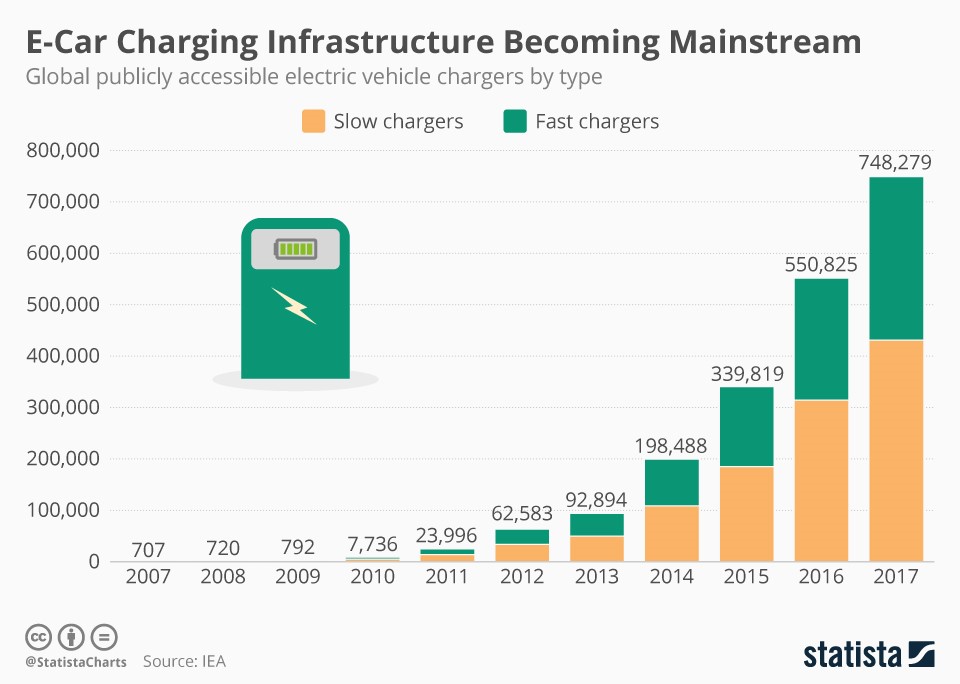 Surprisingly, the percentage of U.S charging stations is only about 6.2% of the global total. And given the geographical size and population of the United States, what EV charging capacity will be required to service the electric vehicle fleet over the next 7-10 years and thus accelerate further market demand for EVs?

Pacific, Gas and Electric (PG&E) is one of the first electric utilities to deploy its own network of residential and commercial EV charging stations across its service areas. To learn more, go to http://bit.ly/2OMvdVd.  For PG&E, Cimcon developed a wireless, revenue grade power meter to accurately measure for billing purposes the per charge energy consumption by a EV user. The billing data is sent from the charging stations over PG&E’s Advanced Metering Infrastructure (AMI) network, thus automating the billing function.

And the Commonwealth of Virginia has announced plans to spend $14 million to install DC fast chargers along interstates and U.S. highways, as well as Level 2 chargers at popular destinations. Virginia’s hope is that the charging infrastructure will promote electric vehicle usage, contributing to improved air quality and reduced greenhouse gas emissions.

EV charging station coverage and capacity is a very complex issue with many dimensions. Given the current inability to accurately size the EV market and its growth on a localized basis, cities and utilities will be challenged to develop profitable plans for deploying EV charging capacity. This blog has been intended to be a basic primer on the topic and in closing poses several open-ended issues for utilities and cities to consider:

Look out for future blog posts to learn more, and visit our Website at www.cimconlighting.com.

BACK TO BLOG HOME