I don’t blame you for not believing this, but it is true. The Mayor’s Office of New Urban Mechanics is an office of innovation within the city of Boston that believes that creativity, design, thinking and cutting-edge technology are not only possible in the public sector, but also essential to improving city services, equity, and citizen engagement. 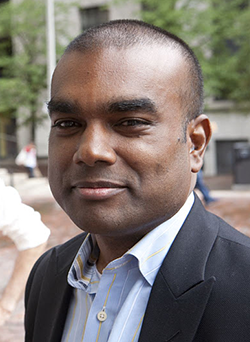 Nigel recently outlined some of the groups approaches for driving innovation in one of our City Innovator Webinars. Click to hear Nigel talk about Driving Innovation within the City.

Nigel Jacob is the co-founder of the team and he describes the office as a “civic innovation incubator that has a people-oriented approach to local government and innovation”. They work under “The Urban Mechanics Ethos” that constantly reminds them to be people-oriented and to collaborate with the whole innovation ecosystem. For that reason, every day they speak with start-ups, universities, social entrepreneurs and everyone in between and beyond.

I know what you are probably thinking. What does he mean with “Everyone in between and beyond”? Well, literally everyone! The office has a genuine intention of having a huge positive impact on the community and what a better way to do this but by engaging with the community. Nigel says that they look for applications of smart city technology, IoT, and design but they always maintain a sense of humanity. In this way, he believes that they make the city more livable.

Although this could sound like an overnight change, the Office of New Urban Mechanics is only able to do this through:

This R&D Lab within Boston’s City Hall has already launched several projects, including one that was done with cooperation from Emerson College’s Engagement Lab. They developed digital games to facilitate dialog about changes in public departments such as education. Another project was an app that improved the interaction between local governments and citizens.

The City of Boston, through the Office of New Urban Mechanics, has found a similar way as the City of Syracuse, to make urban life better. The common pattern seems to be via innovation, people-oriented applications of technology, and design. One could only wish that this way of thinking is contagious among other city governments across the country and world.